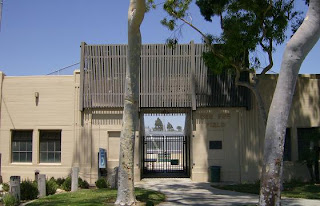 As I was looking about to find the History of Glover Stadium, as is usual lately on Facebook, either the Loara High School site or the Loara 50th Anniversary site there is a vibrant discussion of everything Loara.  From the tree in front of the school to when did it go from La Palma Park to Glover Stadium.  So ask no more, thanks to JoAn Burdick Gottlieb (Class of xx) and Richard MacLeod (Class of 72) my answers are clear. 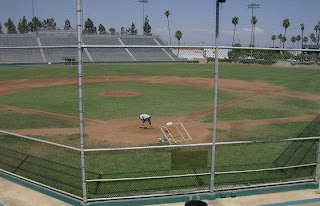 JoAn offered this ... La Palma Park and La Palma Stadium was original name. Anaheim High Coach Glover (pronounced as a "glove" with er ) was honored after he passed away. In the beginning Dee Fee a 6 ft. 3' Anaheim Park Maintenance Superintendent for La Palma Park, had the baseball field named after him and it is Dee Fee Field if you enter from the West entrance look up and see the name Dee Fee Field. In those years I taught my baton twirling groups at La Palma Park on Saturday mornings. I had the Pre-School and young ones, then had the Junior group, followed by the Seniors -- Jr. High and High School. Then I drove to Hollywood to do two shows a night for the Frank Sennes Mouline Rouge Dinner Theater. Saturdays were always hard, as I didn't get to sleep until about 3 am after I drove home from the last show and getting a bite to eat. Couldn't have that much "steam " these days . 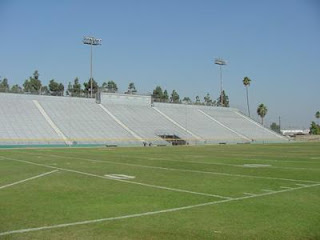 
Joe DiMaggio played there with the Santa Ana Air Base team during World War II.
Connie Mack brought his Philadelphia Athletics there for spring training in 1940.  Mack later told The Sporting News it was the best spring training site he had used in 50 years in baseball.


The St. Louis Browns trained there in 1946. Many of the stars of the Pacific Coast League in the late 1930s and '40s played there during spring training, including Johnny Vander Meer, who pitched consecutive no-hitters for the Cincinnati Reds in 1938.
The baseball and football stadium at La Palma Park in Anaheim is not unlike a museum: It doesn't look special from the outside, but it's filled with history--50 years of it, to be exact. La Palma Park celebrates its golden anniversary this year. The stadium--best known today as Glover Stadium--opened in March of 1939, and the rest of the park in August.
Many of the best high school baseball players in Orange County have played on La Palma's field, including Mike Witt of the Angels, Gary Carter of the Mets and Royals' minor leaguer Bob Hamelin. The stadium has played host to the Orange County high school all-star baseball game the past 22 years.
"The place just has a mystique about it," Cypress College baseball Coach Scott Pickler said. Pickler, who grew up in Anaheim, played American Legion games at La Palma and later coached his Loara High School teams there.
"I remember when we would host the Loara tournament and we would play the first game of the season there," Pickler said. "The field looked perfect. It was like we were the first ones to ever play on it."
The stadium, one of the few multipurpose stadiums for non-professional teams, is maintained by the city of Anaheim's parks department.
In 1937, area merchants decided some vacant land in north-central Anaheim would be a perfect place for an automobile junk yard. After all, about all that happened there were some Valencia Orange Growers' Assn. shows and an occasional flood.
The city council, however, thought a rusty pile of cars and scrap parts would be an ugly border for the city, so it decided to ask the federal government for money to build a park. The Works Progress Administration program provided the funds, plus 63 workers.
Construction began Dec. 16, 1937. There were a few early delays, one to remove nearly 1,000 feet of irrigation pipe that had been unexpectedly unearthed. About a fourth of the work was completed by March of 1938, only to have a fierce storm hit.
The project resumed in early April and grass was planted in June. In July, the Anaheim Chapter of the Lions' Club held a picnic and grass-cutting party at the park.
The stands and the locker rooms below the stands--which are still in place today--were completed in early 1939. By March of 1939, the baseball field was ready for the opening ceremonies.
***
The Glory of Baseball Blogspot

This park has a long history with professional baseball. It was originally built in 1939 and has been used as a spring training home for the former American League team the St. Louis Browns.

First used by the California League in 1941, (pictured above) it was an active professional ballpark until 1948 when the Sunset League last made this their home for 2 years. The Sunset League was famous for being the first "official American minor league" system to utilize Mexican ballparks as part of the league. The Sunset League later spawned the Tex Mex League and the AZ Mex League. These 3 leagues combined, used over half a dozen Mexican ballparks. Many of which still are standing today and are again part of the new Arizona-Mexican league which started 2003.

Amazingly, this little piece of baseball history is still standing in Anaheim. It's not often you find a former professional ballpark.. not used in so many years... that hasn't been demolished, especially in a large urban environment  Even more astounding, is that it's almost in 1941 game day condition, as shown below.

***
And now you know.
What were some of your favorite memories of La Palma Park / Glover Stadium or DeeFee Field.  (besides the bums that sleep there today)
Posted by paul chylinski at 5:43 AM

paul chylinski
He is an educator on a mission to understand the universe and everything in it. He is the advisor for the yearbook and student government class at Loara High School in Anaheim, CA. He serves on the state board for CADA (California Association of Directors of Activities) as a Past President (2011-2012 Presidency). You can email him at chylinski_p@auhsd.us